“It is easy to get to habituated to the threads and disasters we hear on morning news.
Don’t. The morning news is yours to change.”

On October 19th, we were honored to host the Alnoba Environmental Leadership Teach-In Day and awards dinner.   More than 150 leaders joined us to learn, share ideas and get inspired to dare more greatly on behalf of social and environmental justice.

While it is easy to get overwhelmed with the news, the awards night was a grand opportunity to share space with leaders who literally transform the headlines. This included Brad Campbell of Conservation Law Foundation, who recently won a victory over ExxonMobile, and past Alnoba award winners Patricia Gualinga of the Indigenous Kichwa people, Christa Big Canoe of Aboriginal Legal Services, Phil Coupe of ReVision Energy and Matt O’Malia, the architect behind Alnoba’s design.

They slay giants, speak truth, do hard work, take risks and in some cases risk their lives to help save this one Earth we share—and show us all that we have the power to do the same, even if just here in our own  backyards.

We are pleased to share the stories of this year’s six honorees, who each have our deep respect and profound gratitude for all they have done for our planet.

Peace and Love,
Alan and Harriet 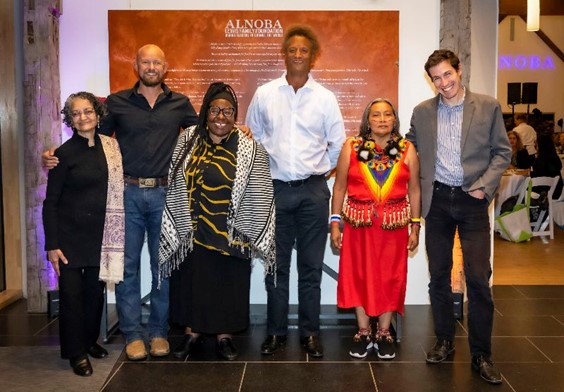 MOMENT OF TRUTH AWARD FOR LEADERSHIP            FOR GENDER EQUITY

Ross was national co-director of the April 25, 2004 March for Women’s Lives in Washington D.C., the largest protest march in U.S. history at that time with 1.15 million participants. Visit Alnoba’s award recipients page to learn more about Loretta.

Josefina Tunki, the first female president of the Shuar People of Ecuador, has demonstrated remarkably brave leadership as these Indigenous defenders of the Amazon fight against the predations of the state and the mining companies. Visit Alnoba’s award recipients page to learn more about Josefina.

For more than 30 years in Tanzania, Dr. Willy Chambulo has been showing how one person can change a country. As the founder of Kibo Safaris and Tanganyika Wilderness Camps, he has provided jobs for hundreds of Tanzanians. His Tanganyika Foundation supports Maasai schools, medical clinics and villages.

Willy has proudly shared his Maasai heritage and values with tens of thousands of travelers over the years, and he is a leading supporter of the Serengeti De-Snaring Program aimed at stopping poaching and saving endangered species. Visit Alnoba’s award recipient page to learn more about Willy.