When we support scholarships through Grand Circle Foundation, of  course our hope is that every student will successfully complete their schooling, and continue on to a fulfilling career. But despite our best efforts in rural Africa, where so many families live in extreme poverty, some young people lose their way. Frank was one of these students—and we nearly lost track of him completely. But with the help of one traveler who refused to give up on him, Frank now has a promising future.

In 2013, Sandra Vaughan, our project coordinator in Tanzania, learned of a very bright student who placed fourth overall in his exams at Tarangire Primary School. Frank was living with his uncle while his parents worked on a small parcel of land, barely able to eke out a living. His uncle sponsored him at Tarangire, but neither he nor Frank’s parents could support his continued education. Frank dreamed of becoming an aeronautical engineer, and made high grades in both science and mathematics. 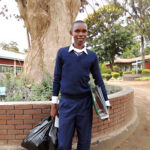 A traveler named Ken Magnuson stepped in to help. Initially, Frank excelled in high school, ranking top in his class of 185 students. Ken spoke with Frank regularly, ensuring the boy stayed on the right track—and Frank, in turn, promised Ken that he would continue his hard work and “not play with his studies.”

In 2017, after completing high school, Frank fell out of touch. Throughout what Sandra kindly refers to as “a gap year,” she repeatedly reached out to him, and kept after him until he decided he was ready to return to school in 2018. During this difficult stretch, she helped Frank resolve an issue with his birth certificate—which bore a different last name than he’d gone by in school. While this issue is not uncommon in Tanzania, Frank’s reason was heartbreaking: His father had abducted him when he was very young, and raised him under a new name. Frank was able to get an affidavit confirming his identity, allowing him to resume his studies. 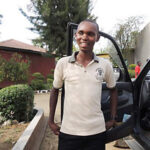 Not wanting to assume she could count on Ken’s support, Sandra had no choice but to tell Frank that no scholarship was waiting for him—but when Frank called Ken with the news, he immediately told Sandra he’d help. With the start of school just days away, the two worked quickly to get Frank enrolled.

Today, Frank is studying at a technical school in Arusha, Tanzania. With Sandra’s help, he found work at an auto repair shop, which has given him glowing reports for his strong work ethic and punctuality. And, she reports, his confidence is growing. Clearly Sandra has confidence in Frank, too: He recently worked on her car, which needed a new clutch, radiator, and ignition key. She has her car back, and it runs beautifully.

While Frank may not have followed the path he initially intended, he is once again pursuing an education—and now has the skills to make a living. Without Ken, Sandra believes Frank would not have survived. Through Ken’s generosity—and his belief that Frank deserved a second chance—he hasn’t just changed Frank’s life. He just might have saved it.