As if a pandemic isn’t enough in 2020, natural disasters from fires to flooding have been everywhere as well.

Our O.A.T. team in Vietnam sent us an urgent appeal this week to help the Minh Tu Orphanage after another typhoon recently hit Vietnam’s central and coastal regions.

“The center of Vietnam is facing it’s fourth typhoon in the month of October – one that forecasters predict to be the worst in 20 years.  About 1.3 million people are expected to be evacuated in and around the coastal town of Danang. Rescue teams that include members of the army are still searching for approximately 20 workers who were buried in a landslide about 10 days ago. And the poor people who have just returned to their homes after the last typhoon, must prepare to evacuate for another one. Hopefully there would be no more serious casualty  and damage from the upcoming typhoon. ” – Khanh Truong SVP Southeast Asia

Funds have already been sent to help the nuns at the orphanage as they take in local villagers who have been flooded out of their homes.

Thank you to the O.A.T. Vietnam team, who quickly rallied to donate  30 bags of clothes, along with food and medicine during what has already been a challenging year. 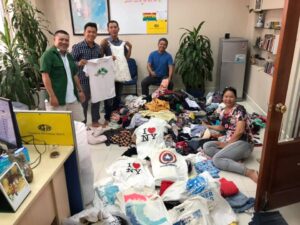 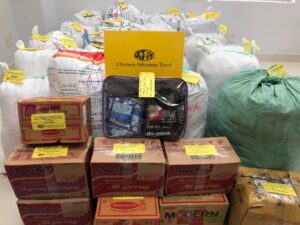